DOMINICA'S APPLICATION FOR A DIPLOMATIC PASSPORT: AN INSULT TO INTERNATIONAL DIPLOMACY 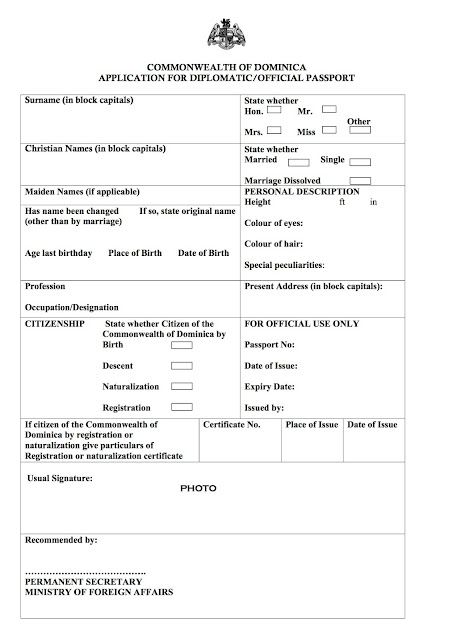 What you see above is the most current Commonwealth of Dominica Application for Diplomatic Passport. The one-page form is a sick joke played upon the international diplomatic establishment. Frankly, they ask for more information when you check into a hotel in many Countries. Note that the required recommendation signature is not the Minister of Foreign Affairs, but the Permanent Secretary.

I could go on and on, but you get the picture, the motto at the Dominica Ministry of Foreign Affairs must be "Don't ask, Don't tell. " Considering that the scheme, through which dodgy foreign nationals obtain Dominica diplomatic passports, is not authorized anywhere in the country's laws, and is in clear violation of the Vienna Convention on Diplomacy, to which Dominica is a signatory, by virtue of its UN membership, I am not surprised that the application itself is a bad joke, played upon the international corps of diplomats and consular officers.

When will the next Dominica "diplomat' run afoul of the law, I wonder, and attempt to escape justice, using his bogus diplomatic passport ?
Posted by Kenneth Rijock at Monday, August 07, 2017