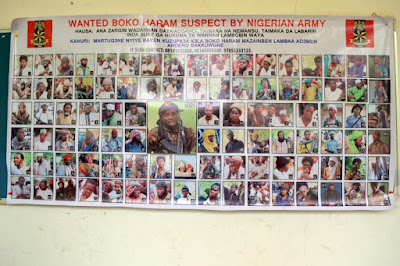 When the Government of Nigeria issued its first "Wanted" poster of Boko Haram terrorists it wants to locate and capture it claimed that the photographs were obtained from "newsreel" footage, and since  many of the original photographs were of poor quality or did not adequately show their faces, that statement was credible.

Later versions, however, contained detailed photographs of dozens of terrorists but the designated sources of that information continued to be referred to as news footage and captured media. If you take a good look at the individual photographs appearing in the more recent posters, you see individual images that are much more suited to social media postings, rather than enlarged portions of grainy news report footage. Many even look like social media portraits, or profiles, such as would be found on individual webpages. It seems that the Government of Nigeria has engaged in data mining of social media, with outstanding results.

Considering that social media has now reached into every continent, and is in general use by all segments of society, including known terrorist groups, we suspect that many of the photographs reproduced in the Wanted posters were extracted from social media resources. While it is a given that terrorist organizations are media-savvy, the fact is social media can be a rich resource of relevant information about its activities, posted not only by their members, but family & friends, associates, and parties on the fringe of the organization, either through political alliances, business relationships, or other connections. This information, when properly accessed and retrieved,  and which may not be available through any conventional methods, may be critical to a counter-terrorist investigation.
Posted by Kenneth Rijock at Wednesday, August 30, 2017