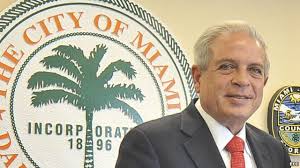 Panama's fugitive former president, Ricardo Martinelli Berrocal, still seeking to bond out, while his extradition case is pending, has apparently called in a political favor in Miami, where he has been living since he fled Panama, reportedly just ahead of multiple criminal charges. Tomás Regulado, the Mayor of Miami, filed a letter with the Court, seeking Martinelli's release on bond, asserting that he needed to be home, for health reasons. It is unclear why this letter was written; Martinelli has had an active social life in Miami, since his arrival two years ago, and there have been no reports of health issues.

Now you know why protest groups are known to throw bananas at the front door of Miami's City Hall; are you familiar with the term banana republic ?