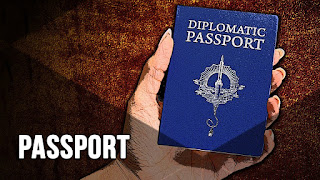 The recent brouhaha over the reported attempt to purchase a diplomatic passport from Grenada,  for an obscene amount of money, is but the latest in a series of missteps, committed by cabinet level officers in the Caribbean. Diplomatic passports, for sale, for cash, by greedy and corrupt senior government officials in a number of East Caribbean nations, is the world's worst-kept secret.

According to a US State Department cable, published by Wikileaks, it is expected that there will be a certain amount of corruption in the region, but the wholesale vending of diplomatic passports, to individuals known to be from unsavory backgrounds, has increased in recent years. Finger pointing, by locals, at government officials in Dominica, as well as other adjacent jurisdictions, merely reminds us that this sordid practice has been ongoing for decades, including in Grenada, at the highest level.

Unfortunately, the illicit sales of diplomatic passports, to foreign nationals engaged in dodgy, if not outright, criminal pursuits, increased when the East Caribbean countries initiated their Citizenship by Investment programs, beginning in St Kitts, in the very early 1980s. Unsuitable "applicants" seeking diplomatic passports routinely approach CBI program operators, as we saw in the recent Grenada scandal, which has spawned such bogus outrage, both from the Government of Grenada, and the CBI licensee, whose officer affirmed that his " close connections" to those programs insured that he could deliver that prized diplomatic passport.

The fact that international law, to wit: the Vienna Convention, lays out specific duties and obligations of true diplomats, does not seem to both those senior officials who pocket millions of dollars in suspect cash, and pass them out like candy. Unless the United Nations, which is not known to enforce the law where its members are concerned, steps in, this practice will continue, and "diplomats" will use these documents to evade customs searches in third world countries, avoid arrest warrants, defraud legitimate businesses, and maintain their career criminal activities.
Posted by Kenneth Rijock at Thursday, August 24, 2017