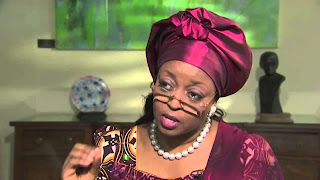 Diezani Allison-Madueke, facing corruption, money laundering, and forfeiture charges in several countries, has arrogantly denied she stole any of the missing $90bn, including a $153.3m forfeiture to Nigeria. She further denied that she has been served with the order, or evidence supporting it. Property allegedly purchased in the United States is subject to a major Federal forfeiture action in the State of Texas.

Madeuke, while known to have been engaged in the theft of massive amounts of petroleum funds that were the property of the people of Nigeria, amazingly received a diplomatic passport from Dominica's Prime Minister, Roosevelt Skerrit, by hand delivery in the United Kingdom. She is not a citizen or national of Dominica, and tendered an illegal cash payment to Skerrit.

The matter was arranged through Dominica's Baroness Patricia Scotland, who knew or should have known, as the Secretary-General of the Commonwealth, that Madueke was totally unacceptable to receive diplomatic rank, for any purpose. Questions about the legitimacy of the transfer of the diplomatic passport to Madueke raise questions about Scotland's fitness to be Secretary-General.