TAIWAN OBJECTS TO VIETNAM'S SOVEREIGNTY OVER PARACELS AND SPRATLEYS

The Republic of China (Taiwan) has objected to Vietnam's legislation including the Paracel and Spratley Island groups into its national territory. Taiwan's claims add an unwanted dimension to the international controversy, for they do not appear to have any merit in either history, geography or international law, and they only serve to increase regional risk of conflict.

The Taiwanese Ministry of Foreign Affairs, reacting to Vietnam's passage of a maritime law that formalises the inclusion of these islands into its territory, claimed that they are inherent parts of the territory of the Republic of China. The Taiwanese statement alleged sovereignty over the Paracel and Spratley Islands .

Geography clearly validates Vietnam's claims to both island groups, which lie east of the Socialist Republic, and adjacent to, or within, Vietnam's Exclusive Economic Zone, and far from both China and Taiwan. Reference to any map of the South China Sea confirms that Vietnam's proximity to both disputed groups.

The Taiwanese claim appears to be totally without merit at international law. The Republic of China occupied portions of these island groups only after the Second World War, after Japan vacated them and renounced its existing claims, but Taiwan abandoned them soon thereafter. Claims based solely upon an old (circa 1947) Chinese map, without actual possession before 1945, cannot be sustained.


China's claims also fall short, due to the inclusion of both island groups in Vietnam, from the seventeenth century, and the administration of the islands, as a part of French Indochina, in the twentieth century. It seems clear that, between Vietnam on the one hand, and China and Taiwan on the other hand, Vietnam has the primary right to sovereignty. 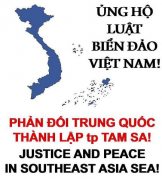