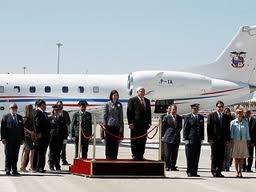 When Panama's President, Ricardo Alberto Martinelli Berrocal, travels internationally on his official government aircraft*, seen above, (which was a present from the Republic of Taiwan), he is not alone. The plane is generally followed by a second aircraft, reportedly owned by the prominent Panamanian family who is in business with the President in the $300m Ocean Reef Islands Project. It is who, and what, is in that second aircraft that interests me.

(1) Large amounts of US Dollars. Exactly where is all that cash going, Mr. President ? There are many good banks in the Republic of Panama. Is he moving cash into offshore financial centres, and whose cash is it ? I have seen photographs of this aircraft in Switzerland in 2012.

(2) His reputed mistress goes on all the international trips. There must also be other passengers, I surmise.

Who else is in the entourage on board that aircraft ? That's today's mystery.