PROFILE OF AN UNREHABILITATED SCOUNDREL 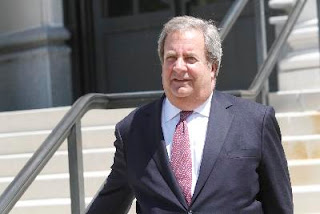 A reader sent me a "shame on you" for covering the efforts of the Massachusetts Bar Association to disbar former Miami attorney Michael Burnbaum, and he deserves a response. First, it is never my intention to condemn individuals who have made mistakes in their lives, so long as they learn from them, and rehabilitate themselves, but those who fail to learn from their prior transgressions must be exposed, lest they defraud, injure or harm others who do not know their story. I do not judge people, but I do warn my readers if I see something that I believe should be brought out of the dark, and into the light.

Before he went to Federal Prison, Mr. Burnbaum was a neighbor whom I would see from time to time. When he was charged with asking an imprisoned suspect where he hid his organisation's cocaine shipment, and asked that he draw him a map, he knowingly placed himself in a major cocaine conspiracy, for which he drew a long prison sentence. Was it excessive ? Probably so, but the backstory may explain it.

As a former Federal prosecutor, Mr. Burmbaum was clearly made an example of by the US Attorney's Office. I have seen that "special" treatment occur repeatedly; clearly, their fall from grace is made more painful by a charging process that results in the imposition of longer sentences.

He did know how to game the system; the court file shows that his process of cooperation with law enforcement resulted in an extended delay in both his sentencing, and his surrender to commence his incarceration. His sentence was reduced for what the system calls "Substantial Assistance."

He had one black mark during that period; he retained a major American private investigation firm, staffed by former law enforcement, to assist him in bringing to justice a former client, but when prosecutors decided that the seizure of the fugitive might result in a rupture of diplomatic relations with an Caribbean country, his capture was cancelled. Burnbaum then defaulted on paying the investigators for their time; Strike one.

Fast forward several years; Burnbaum is finally released from prison, and returns to Miami. He's going to make a fresh start in New Jersey, far away from the temptations that brought him to prison in the first place. Only problem: he says he is going to work for someone he met in custody, which is strictly prohibited under the Supervised Release regulations; Strike two.

In 2011, he takes advantage of the fact that his Florida sentencing judge did not notify Massachusetts Bar Association authorities that he lost his law license in Florida, due to the felony conviction, meaning that his license in Massachusetts is still valid. He has the unmitigated gall to undertake to represent  a criminal defendant in a case in New York. Whilst he only had to affirm that he was not the subject of pending discipline, he cleverly exploited the fact that any prior disciplinary history was not required to be disclosed. I do question the ethics of the New York lawyer who was responsible for his admission for the limited purposes of the criminal case.

During that case, someone finds out that he has served time for a Federal felony, the press catches it, and the Mass bar initiates proceedings, with the Supreme Judicial Court of Massachusetts, for Reciprocal Discipline; Strike three.

For the past six months, Burnbaum, and his attorney have delayed the Massachusetts proceedings; only now has the Court ordered him to show cause why discipline, meaning disbarment, should not be imposed. Is Mr. Burnbaum rehabilitated ? What do you think ?

So, if you wonder sometimes why I come down hard on someone, it is because they deserve it.