The situation in Panama is worse than previously believed. Reports just now surfacing indicate that eight Canadian and European journalists, reporting on and filming the civil disturbance at the National Assembly yesterday, were detained, and their cameras and film confiscated.

President Martinelli has withdrawn two controversial bills from the Special Session of the Assembly, and has stated that he will send the matters to a special committee, composed of a broad spectrum of panelists from the business sector.

A government press release indicated that Martinelli will consult today with Archbishop José Domingo Ulloa, and Auxiliary Bishop Pablo Varela, in an effort to obtain their assistance in this tense situation.

Reports continue to come in;

(1) An unverified report of the death of an Assembly member yesterday, as the direct consequence of the government's use of the Militia against Assembly Deputies.
(2) Statements by eyewitnesses that the Militia used military-grade tear gas on Opposition members of the Assembly, who had refused to vacate the building after Martinelli suspended its session by decree. (3)The commander of the National Police refused to open fire upon the demonstrators, and Martinelli was forced to deploy the Militia, a paramilitary, not law enforcement, organisation. This act may violate Panamanian law.
(4) Many of the partners of Panama's major law firms are not at their desks today; they are all in emergency meetings at their respective political parties.
(5) Streets are blocked by Militia units, making crosstown travel impossible. Most stores in Panama City are closed; markets already are showing empty shelves. 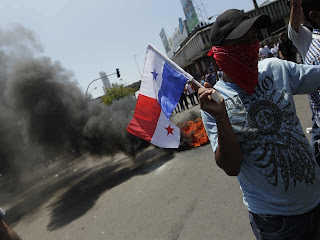 We shall update our readers shortly with new information, as it becomes available.