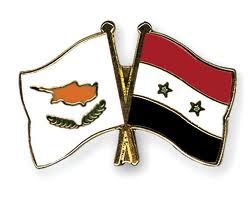 Reports from the Middle East of persistent rumours that Syria is using financial institutions in Cyprus to evade international sanctions are disturbing, in light of the war crimes being perpetrated upon unarmed Syrians who oppose the Assad regime. Cyprus, already dependent upon Russian financial assistance due to the Greek crisis, is reportedly seeking a new bailout from Russia. This will come at a price.

Whilst admissible evidence of these transactions has not yet been made public, reliable sources advise that Russia is using Cypriot financial institutions to aid Syria. We have already seen direct proof that Cyprus does not enforce the sanctions; when Cyprus allowed the Chariot, a Russian freighter loaded with tons of ammunition, to stop in Cyprus en route Syria, and neither detained nor disarmed it. The vessel was in violation of EU sanctions.

Cyprus, with its Russian-speaking and educated leader, has grown closer to Russia in recent years, notwithstanding its EU status. Using Cyprus as an intermediary, to assist a sanctioned country is not new. During the Balkan conflicts of the 1990s, and in the post-war period, Cyprus was used to evade sanctions against Serbia.

The exact nature of the financial intercourse with Syria is unknown, but we are attempting to obtain that information. Compliance officers at EU banks:

(1) May want to examine the accounts of bank clients who are shipping dual-purpose goods to Cyprus, especially when these goods exceed the historical requirements of that country.

(2) Account opening requests from individuals who may possibly have Syrian surnames should also be studied carefully, lest you admit any Politically Exposed Persons (PEPs) who claim that they are merely wealthy, but apolitical, businessmen from Damascus. Did the prospective client give you a bank reference from Nicosia ?

If you have seen any unusual transactions recently, involving your banks clients and Cyprus, you may want to initiate an Enhanced Due Diligence enquiry.
Posted by Kenneth Rijock at Monday, June 18, 2012