Troopers of the Texas Department of Public Safety (DPS) conducted a traffic stop, on a Toyota Camry, on Interstate 40 near Amarillo, Texas, for a moving violation. The vehicle, which was traveling from Kentucky to Nogales, Arizona*, was driven by Maria Vega-Montano, of Tucson.

After receiving a consent to search, officers found 23 bundles of currency, totally $287,500, concealed underneath the vehicle, in what was described as an "aftermarket compartment," meaning that it was a custom-made addition, designed to carry contraband, without detection.


Ms. Vega-Montano was arrested and charged with money laundering. I wonder if she, or her employer, knew that this segment of I-40 is Texas' portion of the National Purple Heart Trail, which is dedicated to those American soldiers, alive or dead, who have been wounded in battle, in the service of their country, and received the Purple Heart. I would imagine that law enforcement pays particular attention to vehicles traveling along this route. Obviously, the money launderer in charge of this operation did not do his homework. 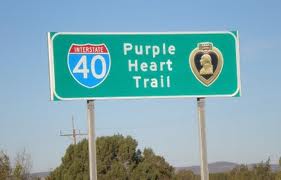