CHINA IS BUILDING ON ISLAND CLAIMED BY THE PHILIPPINES


According to the Philippine Department of Foreign Affairs, China is building new structures on Mischief Reef, which is a territory long claimed by the Philippines. China reportedly occupied the prized atoll in 1994, whilst Philippine naval vessels were absent, due to inclement weather. It has ignored the objections of the Government of the Philippines, and is in violation of the Declaration on the Conduct of Parties in the South China Sea (DOC). 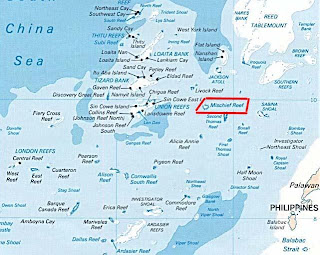 Mischief Reef lies only 230 km. from Palawan, and therefore is well within the Exclusive Economic Zone of the Philippines. If any country has a historical and legal claim to Mischief Reef, it is the Philippines. This new Chinese action, adding to what is obviously a military fortification, will only increase tension with Manila, and also operate to raise Country Risk for the Philippines.