"GODMOTHER OF COCAINE" ASSASSINATED IN COLOMBIA Griselda Blanco, the notorious fugitive Colombian drug kingpin, who was arrested in the United States after she went to an informant for the Drug Enforcement Administration to launder her money, was slain in Medelliín, Colombia yesterday. Blanco, who is believed to have invented the motorcyclist drive-by assassin technique, where the victim is shot by a passing cyclist, died after sustaining two bullets to her head. Apparently, someone chose to end her life the same way she had dozens of others dispatched. Every time we think that the old "Miami Vice" days of drug violence and death are over, we see events like this. 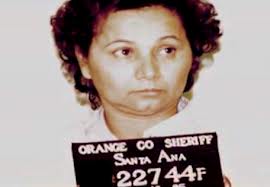 Blanco, dubbed the Godmother of Cocaine by the press, is believed responsible for the infamous 1979 Dadeland Massacre, where three gunmen in her employ, deployed from a van advertising party supplies, sprayed a Crown Liquor store in Miami's upscale Dadeland Mall with MAC-10 automatic weapons fire,  killing two rival drug traffickers, in the process destroying the store and killing innocent civilians in the store and mall.  She was incarcerated in the New York and Florida for two decades, for her many crimes, and deported to her native Colombia after her release. 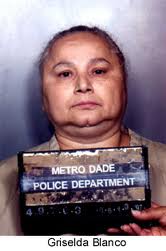 She is alleged to have ordered the killing of dozens of competitors in the drugs trade,  subordinates who slighted or cheated her, and one of her three husbands, and is generally thought to have been the first kingpin to engage in narcotics smuggling, in large quantities, into the Continental United States.