Laura Pendergest-Holt, Stanford Financial Group's CIO, has been sentenced* to serve three years in Federal Prison, to be followed by three years of Supervised Release. Pendergest, who was originally charged with twenty one counts, including Wire, Mail and Securities Fraud, and Money laundering Conspiracy, pled guilty to one count of Conspiracy to Obstruct an SEC Investigation. Her attorney had requested that she be sentenced to Home Confinement (House Arrest), or to a Halfway House, due to the fact that she has a small child at home. The Court ordered that she start serving her sentence immediately.

Pendergest was the third highest-ranking officer in Stanford's $7bn Ponzi scheme; prosecutors alleged that she lied to investors and the firm's financial advisers, and obstructed the SEC investigation of SIB. She claimed that she was not aware of the massive fraud until late in the scheme. 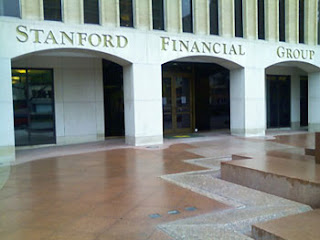 The court file contains a number of sealed entries, which is generally a good indicator that the defendant is cooperating with law enforcement in the prosecution of additional individuals, and may also be assisting in the location of Stanford assets for seizure and forfeiture by the United States.