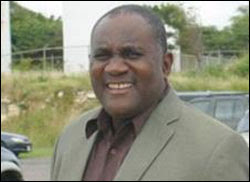 The Government of Antigua continues to ignore its legal obligation to extradite its corrupt former Financial Services Regulatory Commission head, Leroy King, notwithstanding that he has exhausted all his legal remedies. It has been alleged that King received at least $500,000 in bribes, from master Ponzi schemer, R Allen Stanford, since convicted in a US District Court in Texas. That court has been seeking King for several years. Antigua should end its delaying tactics; justice delayed is justice denied.

Rumours abound about the extent of King's knowledge regarding who, in the Government of Antigua, received illegal payments from, or on behalf of, Stanford, whose Stanford International bank, headquartered there, sold non-existent certificates of deposit to American investors.

Could King's testimony bring down the government in Antigua ? We cannot say for sure, but it is, frankly, time for that country's leaders to send him to face justice in Texas. Antigua may need to clean house, but if it allows the country to move forward, and away from the long shadow of Mr. Stanford, let it happen.