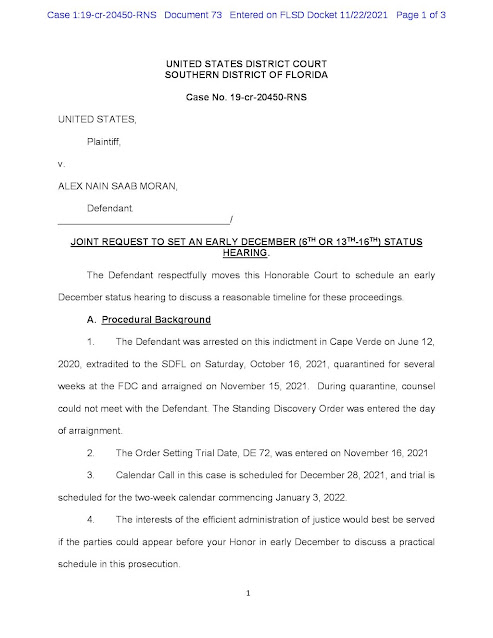 The attorney for Defendant ALEX NAIN SAAB MORAN has filed a motion to a Status Hearing in early December. The points he has raised in his motion:
(1) Noting that the case is currently set for a late December Calendar Call, where trial readiness is discussed, Saab's counsel pointed out that the trial judge that his client's appeal of the adverse ruling on his diplomatic immunity issue is still pending,
(2) Counsel apparently wants to discuss scheduling pre-trial procedure, and the setting on a trial date.
(3) Counsel has specifically mentioned depositions, which can be authorized by the Court under Criminal Rule 15. he may ask for them to be taken, but he must show "exceptional circumstances and in the interests of justice." Given defense counsel's exceptional experience and credentials, you must consider whether he is contemplating pretrial actions that will potentially have an effect on post-trial relief, which he has, in other cases, employed successfully on behalf of other prominent clients.
Rule 15. Depositions (Dec. 1, 2012)

(1) In General. A party may move that a prospective witness be deposed in order to preserve testimony for trial. The court may grant the motion because of exceptional circumstances and in the interest of justice. If the court orders the deposition to be taken, it may also require the deponent to produce at the deposition any designated material that is not privileged, including any book, paper, document, record, recording, or data.

(2) Detained Material Witness. A witness who is detained under 18 U.S.C. §3144 may request to be deposed by filing a written motion and giving notice to the parties. The court may then order that the deposition be taken and may discharge the witness after the witness has signed under oath the deposition transcript.

The motion is stated as being without opposition from the US Attorney's Office. Page 1 appears above; Page 2 is below. 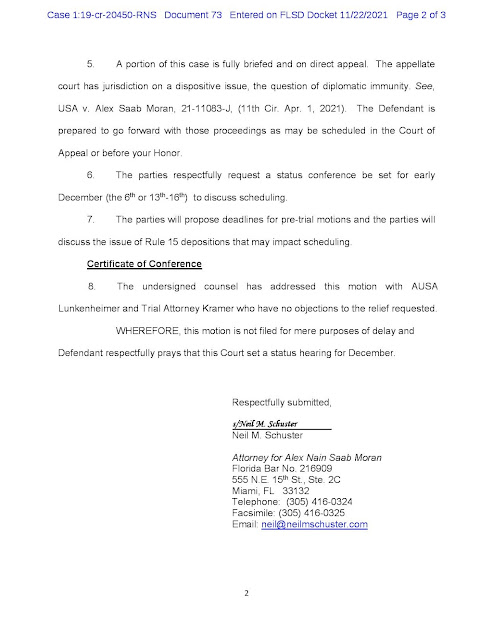