It seems that Alex Nain Saab Moran, the accused money launderer for Venezuelan President Nicolas Maduro, was seriously upset when a number of media types with questionable ethics chose to publish the images of an incarcerated Saab to a curious world. Perhaps he was concerned that his carefully-constructed public image took at hit that day. Was the Federal Detention Center photo of a Saab shackled and in prison garb too vulnerable for his taste ?

For those not familiar with procedures in Federal Court, the taking of images during proceedings are strictly prohibited by Rule 53, Fed. R. Crim. P.  Saab's lawyers want the Magistrate Judge to punish the offenders, who copied Saab's Court Zoom link image from his virtual First Appearance, and posted them on the Internet, and reportedly, elsewhere.

You have to ask yourself why Saab's attorneys are making much ado about nothing, filing an eleven page motion; their client has much more to concern himself with, such as how he can mitigate his exposure to the penalties for violation of the Money Laundering Control Act, and how they can keep him safe, should his cooperation against some former clients result in efforts to silence him, with extreme prejudice.

Counsel for Saab asks the Court to hereafter limit Zoom access to immediate family, and accredited members of the establishment media, with a long record of adherence to Rule 53; the public would then have to satisfy themselves with only a dial-in audio link. Whether those restrictions would constitute interference with a Free Press I leave to the attorneys who specialize in the rights of media.

Let me suggest that the US Marshals safely escort Saab into the Federal Courthouse, and let him take his appearances before the Court in person, each and every time that his presence is required. 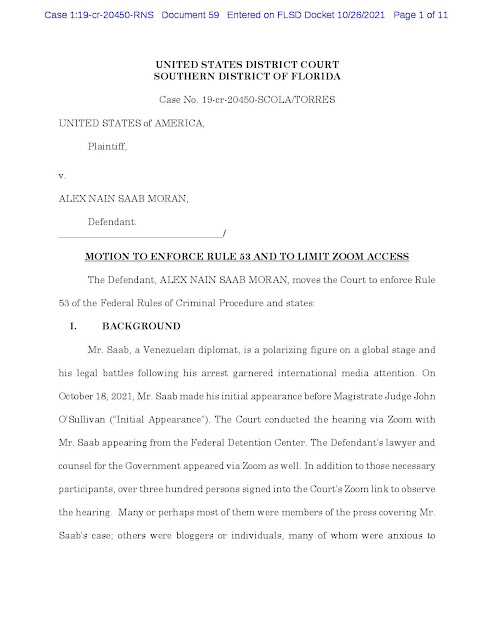 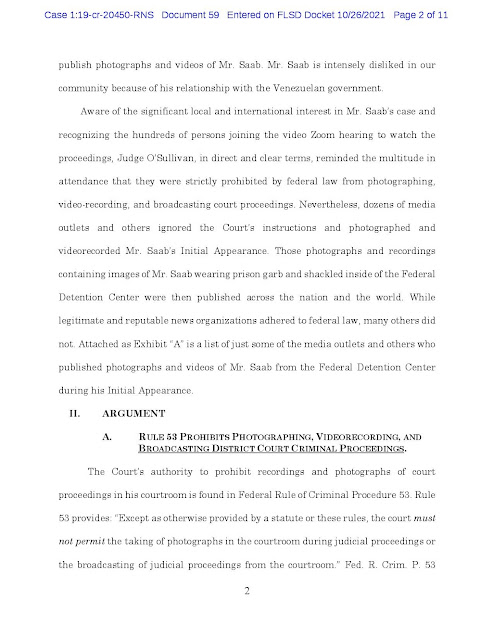