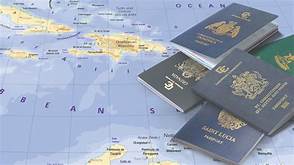 Mainstream articles appearing recently, in both the Wall Street Journal and Forbes, and discussing options available to affluent readers who might be interested in acquiring a Citizenship by Investment (CBI) passport and citizenship in one of the five East Caribbean States that have recently reduced the cost of their offerings, are not disclosing the negative aspects of purchasing, holding and using a CBI passport. The glossy marketing programs of the international consultancies that offer CBI products do no educate their prospective clients to these potential dangers; they find out later, to their dismay. Since  major media often end up endorsing CBI, without exploring the darker aspects, and risks, of buying them, we are shall now summarize what we believe to be the most important issues:

1. THESE JURISDICTIONS ARE PRESENT OR FORMER TAX HAVENS, WHERE MONEY LAUNDERING OF THE PROCEEDS OF NARCOTICS TRAFFICKING DID, OR STILL DOES, OCCUR. CBI passport buyers rarely consult a qualified independent attorney, to perform due diligence on the jurisdiction where the passport is being issued. Is it not still a known tax haven, and will that fact increase IRS scrutiny of the new passport owner, should he choose to bank ethere ? Is it now, or was it formerly, the depository of drug trafficking profits ? Passport purchasers may be, unwittingly, raising their profile with American and Canadian law enforcement by just acquiring, and using a CBI passport from a high-risk jurisdiction.

2. MANY OF THESE EXPENSIVE CBI PASSPORT PROGRAMS ALLOW THE ISSUER TO REVOKE THE PASSPORT WITHOUT ANY DUE PROCESS, OR LEGAL PROTECTION. Buyers may later find out, to their chagrin, that their prized passport can be revoked at will, without any legal cause or reason, and that this action is not subject to judicial or administrative review of any type. Furthermore, the local courts will most likely not be a suitable venue for redress of your grievances about the matter; as foreign plaintiffs opposing government agencies, your recovery is doubtful, and could even result in your arrest on bogus criminal charges.

3. MANY OF THESE CBI PASSPORTS ARE SOLD TO INTERNATIONAL CAREER CRIMINALS, AND YOUR CBI PASSPORT MAY END UP BEING TARNISHED BY ARRESTS OF OTHERS HOLDING A SIMILAR TRAVEL DOCUMENT, ESPECIALLY IF NEGATIVE MEDIA REPORTS EXPOSE THE PASSPORT AS A TOOL FOR CRIMINAL ACTIVITIES. The legitimate CBI passport holder may suffer from "guilt by association," where the jurisdiction is repeatedly cited in the press as a favorite device of white-collar criminals.

4. CBI PASSPORTS ARE OFTEN EMPLOYED BY INTERNATIONAL SANCTIONS EVADERS, TERRORIST FINANCIERS AND AGENTS OF STATE SUPPORTERS OF TERRORISM. do you really want to be associated with the likes of those classes of CBI passport holders ? Read where many news articles report that the individual arrested was found to be holding multiple CBI passports, all with different names and dates of birth.

Before even considering purchasing a CBI passport, it is humbly suggested that you retain the services of a qualified attorney, experienced in the Caribbean environment, including its region-specific risks and dangers, especially where CBI passports are involved. Do not dive in feet first without learning about all the dangers you could possibly be exposing yourself to. After due consideration, you most likely will decide to pass on the CBI passport program, because it results in a level of potential risk that most individuals are not willing to assume. Caveat emptor.