ALEX SAAB MORAN IS ARRAIGNED; THE PROFESSOR CLAIMS HE WAS TOLD SAAB HAS BEEN ASSISTING AMERICAN LAW ENFORCEMENT 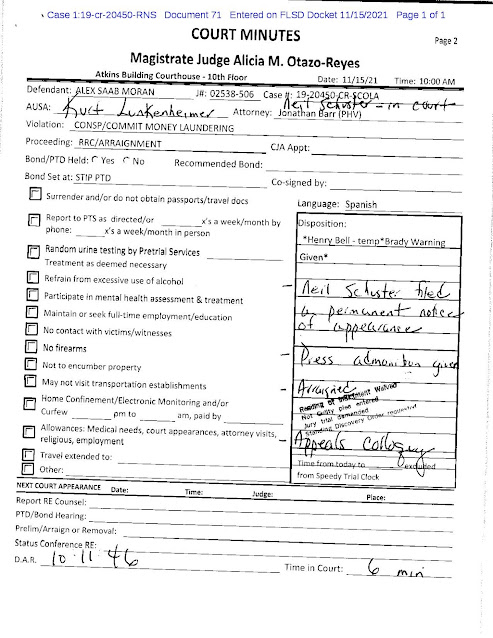 Alex Nain Saab Moran was arraigned today in US District Court in Miami; the details, which appear above in the Clerk's worksheet for the case, show him entering a plea of not guilty to the sole remaining charge, Conspiracy to Commit Money Laundering. He will be held in Pretrial Detention, which his attorneys apparently stipulated to. Neil Schuster, Esq. has entered a Permanent Appearance. No trial date has been set.

The real news, however, came from Professor Bruce Bagley, who is awaiting sentencing this month for assisting in cleaning money for Saab, through his personal bank accounts in the United States. His extensive Sentencing Memorandum reportedly contained the allegation that he was told that the money he was laundering was destined to be funneled quietly, and through a third party known to Bagley, to American attorneys who were representing Saab, and that Saab had met repeatedly with agents from the Drug Enforcement Administration, in Europe and Colombia.

When this blogger reviewed the memorandum a few days ago, it was heavily redacted, indicating that it originally contained information that was not intended for either the press or the public.It has been reported that a journalist reviewed the memorandum when it was first filed, and the copy filed on PACER, the government's public online database of pleadings, it was unredacted. Later, according to sources not identified, it was removed, and a substantial portion was redacted.

Those of us who know Professor Bagley thought that the deleted passages might have contained personal family information about his late wife, believed to be embarrassing, but we now learn that he was reportedly told about Saab's purported cooperation with American authorities, which is said to have occurred prior to his 2019 indictment. 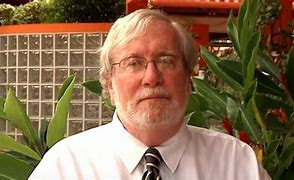 There have been repeated rumors, from several quarters, stating that Saab agreed to cooperate even before he arrived in the United States. It will be interesting to see how the information about Saab's cooperation, which was certainly deemed to be confidential, ended up contained in what was, at first, a publicly-available document, and why that caution was not conveyed, strongly, to defence counsel for Bagley.

Individuals who moved the proceeds of crime for Saab in the global banking system, especially those who facilitated his money laundering activities in Malta, Antigua & Barbuda, and Dominica may lose some sleep tonight, worrying about their exposure. Defendants that cooperate with US law enforcement are required to disclose their complete criminal past, not just that which they have been arrested for. We wonder whether their attorneys have advised them of that little detail.