ALEX SAAB MORAN WON'T BE AT HIS ARRAIGNMENT ON NOVEMBER 15TH 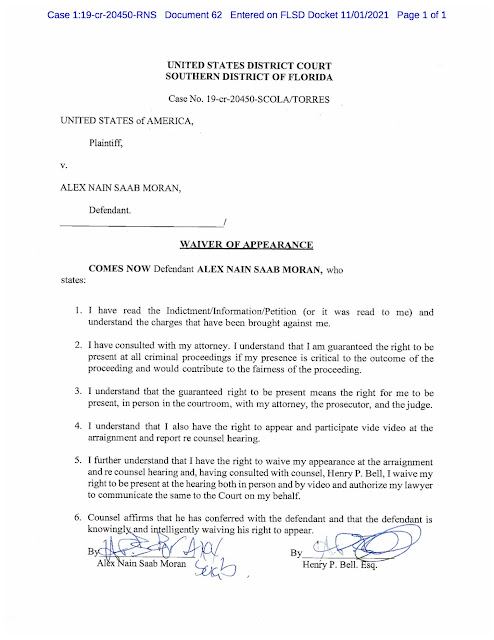 Attorneys for the accused Colombian master money launderer, ALEX NAIN SAAB MORAN, have filed a signed Waiver of Appearance, which means that he will not appear,  even virtually, at his upcoming arraignment, reportedly now scheduled for November 15, 2021. A copy of the Waiver appears above for your information.

If you are following our coverage of the case thus far, you know that his counsel has previously filed a motion requesting the Court to punish those virtual witnesses at his First Appearance, who illegally acquired his photograph, shackled & in prison uniform, and took it viral on the Internet and elsewhere. That might explain his reluctance to appear again in person, subject to having his image surreptitiously taken, and later circulated globally.

Whether this Waiver will add fuel to the speculation that Saab has already entered into a plea agreement with the Department of Justice is anyone's guess. We do note that, in addition to prosecutors from the Miami US Attorney's Office, lawyers from DOJ Main Justice  in Washington are involved in this high-profile case. We will be watching closely for any notice of hearing captioned "Change of Plea," which would confirm the rumours; stay tuned.