DETAILS ABOUT REZA ZARRAB SLIP OUT FROM TURKEY 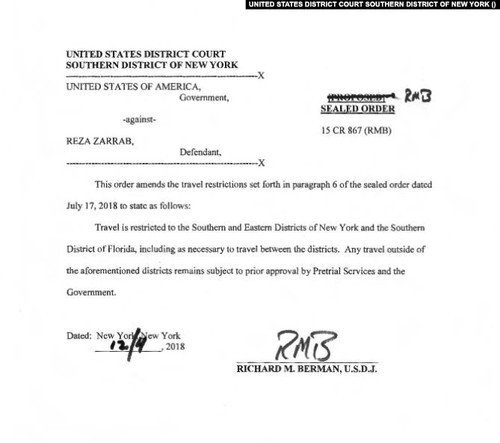 Turkish media claims that it has acquired one of the sealed court orders involving the 2018 release on bond of the Turkish-Iranian oil sanctions evader and money launderer REZA ZARRAB. Zarrab was reportedly released on bond on or about July 18, 2018, pursuant to a sealed release order which allegedly required him to post a $5m guaranty, and a $100,00 cash payment to the Clerk of Court. The first release order, which has not been published yet, is authenticated by a subsequent sealed order, which appears above. How the media obtained it we do not know; the docket does not confirm this document.

Zarrab was seen at a Manhattan restaurant during his case, and not in custody, giving rise to rumours that he was cooperating, and had an arrangement, not with US law enforcement, but the intelligence community, as law enforcement protocol does not permit such personal freedom while a defendant is actually in custody. Here we see evidence that he was actually, and extraordinarily, released on bond. No wonder they kept it quiet; the public might find it odd, given the extent of his crimes.

Zarrab's case has been regarded as the most important Iran oil sanctions case to date; we suspect that the Government, which portrayed him as the biggest sanctions catch, concealed his cooperation whilst he gave up important evidence about other evaders. Transparency is obviously not the rule when it comes to obtaining the cooperation of major offenders. By the way, what has he been doing in New York, all this time, hitting all the restaurants ?