WHY DID THE US DROP ITS APPEAL OF TURKISH BANKER'S SHORT SENTENCE ? 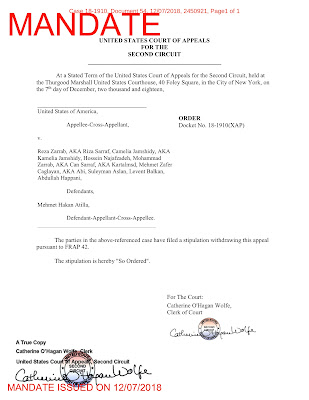 Mehmet Atilla, the Turkish banker who assisted Iranian oil-for-gold sanction evader kingpin, Reza Zarrab, received a 32-month sentence after his conviction. When he filed an appeal of his conviction, the US Attorney's Office in New York filed a cross-appeal, seeking additional prison time.

Now, the US Government has dismissed its cross-appeal of the sentence, but the reason for the dismissal has not been made public. Reza Zarrab, who testified against him, has not yet been sentenced, due to what appears to be extraordinary cooperation. Has Atilla decided to also render  Substantial Assistance to the Office of the Special Prosecutor, as Zarrab reportedly did ? We cannot say, but it is important to learn precisely why the US Attorney in New York chose to assist Atilla in such a favorable manner.
Posted by Kenneth Rijock at Thursday, March 07, 2019