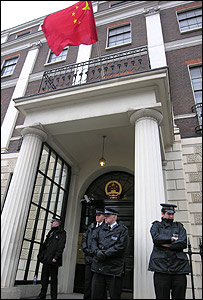 The Embassy of the Peoples' Republic of China in the UK appears to be interfering with local law enforcement anti-money laundering investigations. Ninety-five Chinese students in the United Kingdom have has their accounts frozen, for suspected money laundering. Many of the students' bank accounts had millions of Pounds pass through them, under circumstances that suggest active money laundering of the proceeds of crime.

Some observers have stated that high-end luxury goods are being purchased in London & Paris, carried back to China by "tourists,' and resold to consumers, yielding not only clean local Chinese currency, but handsome profits as well.

The Chinese Embassy has instructed the individuals whose accounts are frozen, some of whom are suspected of not being matriculated students, but those using English language studies as a cover for criminal activities, to "safeguard their legitimate rights and interests through legitimate means", according to Chinese media. This sounds suspiciously like a call for the "students" to take advantage of any and all legal and procedural dilatory tactics available to them in the UK, to frustrate the ongoing law enforcement investigation.

There is absolutely no legal reason for full-time students to receive extraordinary amounts of money, deposited in cash, into their small bank accounts, which traditionally only exist to support them during their studies. We note that the Embassy press release critically asks that the British Government "handle the allegations in a fair and lawful manner," inferring that they are not true, and that the actions were not lawful.
Posted by Kenneth Rijock at Wednesday, March 06, 2019