Felix Sater, the career criminal known to be a longtime advisor to Donald Trump and the Trump Organization, has been sued, in US District Court in Manhattan, by BTA Bank of Kazakhstan, and the country's capital, Almaty.  The Suit seeks tens of millions of dollars in damages for laundering stolen embezzled funds, for punitive damages, and for other relief.

The Complaint alleges that Sater laundered "the stolen funds through at least five separate schemes in the United States." One of those projects is "the Trump Soho scheme" at page 32 of the 61 page Complaint.  You can read the Complaint here. 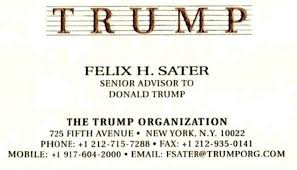 Sater is infamous here in the State of Florida for engaging in a major fraud in a South Florida construction project; the investors who were victims could not know that Sater has been convicted in a $40m stock fraud case, because a Federal Judge in New York sealed the conviction, due to the fact that Sater was a Confidential Informant for law enforcement.
Posted by Kenneth Rijock at Thursday, March 28, 2019