WHAT WAS HEZBOLLAH FINANCIER ARRESTED IN KUWAIT DOING WITH A FLORIDA CORPORATION ? 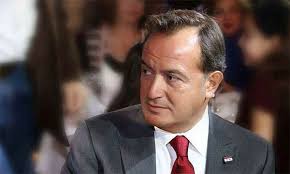 Mazen Al-Tarazi, the Syrian businessman arrested recently in Kuwait and charged with money laundering for Hezbollah, and alleged to be Syrian President Assad's "Man" in Kuwait, has ties to Florida. He is listed as the Vice President and Director of Four Brothers International, Inc., a Florida corporation formed in 2013 in Orlando. There are 4 directors of the company, which provides a clue to the origination of the name. They appear to be Kuwaitis.

His listed address on the Articles of Incorporation is a large single-family home now listed for sale for $600,000. The registered Agent is a local CPA. The corporation was dissolved by the Florida Secretary of State in 2014 for failure to file an Annual Report.  Given Mr. Al-Tarazi's alleged criminal occupation, we wonder why he, and three other foreign nationals from the Middle East, formed this company, and what kind of business it was. Director Rabee Fattal was the resident at 5719 Argosy, the listed address for Al-Tarazi.

Allowing a company to be dissolved the year after its formation, and after it has served a limited purpose, is a technique often employed by money launderers and other financial criminals, for they never have to file any additional information, obtain a Federal tax number, or update in formation on the incorporator or initial directors.

Just what was Mr. Al-Tarazi doing in Florida, we ask ? 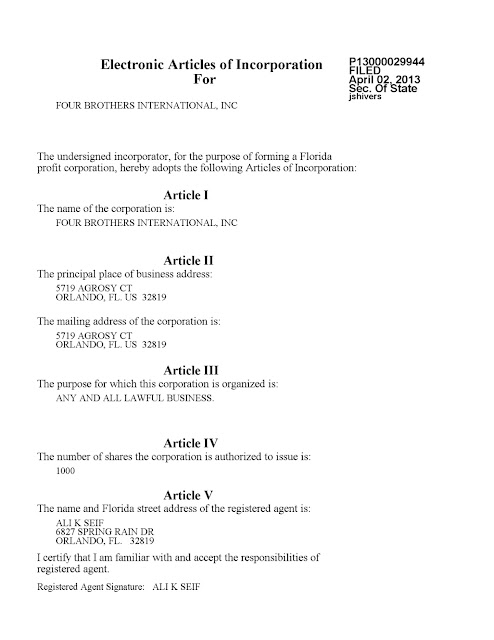 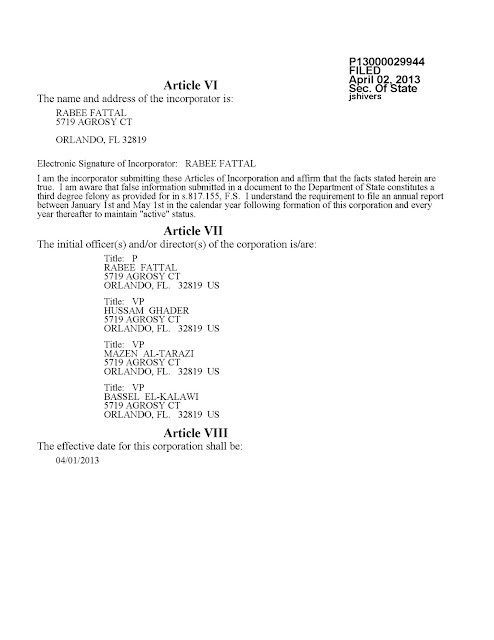