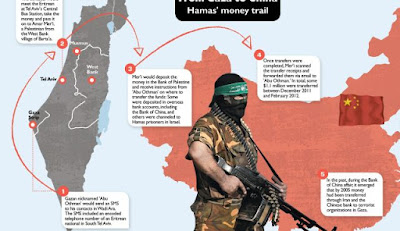 Details of how a Palestinian who was an agent of Hamas, a Specially Designated Global Terrorist organization, transferred money in an out of the West Bank (Judea & Samaria) and Gaza, include a substantial number of transactions that went through the Bank of China. The intended recipients are Hamas prisoners convicted of terrorist acts in Israel.

The testimony of Amar Mer'i, a money changer arrested when he attempted to bulk cash smuggle US Dollars and NIS (Israel currency) into the West Bank, and later was sentenced to 28 months in prison in Israel:

(1) Most of the transfers involved accounts at the Bank of China.
(2) He often received cash at bus stations, from cash couriers.
(3) One transfer went to a Citibank account in New York City.
(4) Several transfers went to HSBC accounts in Hong Kong.
(5) Some of the money was transferred to accounts in India & Turkey.

We have previously covered a civil suit, filed in US District Court in New York, involving
allegations that both Hamas and the Palestinian Islamic Jihad hold accounts at the Bank of China.
Posted by Kenneth Rijock at Tuesday, March 05, 2019