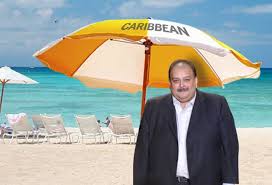 Since Antigua, after sitting on the Mehul Choksi extradition documents for seven months, actually began to move the case forward last week, is it all merely a sham for foreign consumption ? The Court in Antigua immediately adjourned the matter to April 9, which after such a lengthy delay, indicates that the activation of the extradition process is merely a hasty response to the UK arrest of Choksi's partner in crime, his nephew, Nirav Modi, and will not result in any action.

In another move, Choksi's attorneys in India have petitioned to have the pending arrest warrant against him cancelled, due to his purported poor state of health. Given that he seems to have no trouble living a lavish life in Antigua. the argument fails.

Whether Choksi will indefinitely, like Stanford International Bank Ponzi scheme fugitive, Leroy King, evade justice, by remaining in Antigua, where prominent fugitives find safe harbor, so long as the share their criminal proceeds with local politicians and businessmen, we cannot say, but we will be watching.