WHEN WILL CHINA LEAN ON INDONESIA, BRUNEI AND MALAYSIA ?

At the extreme southern end of the South China Sea lie Brunei, Malaysia and Indonesia, island nations that all claim economic rights to, and in some cases, territory within, its waters. To date, Chinese expansionist claims to the entire maritime region, which include territory claimed by these three countries, have no resulted in any nationalistic rhetoric or military incidents directed at them. When will China get around to these three nations, and what will that do to their country risk levels ?

The self-declared maritime sovereignty of China extends to waters just offshore these three countries, effectively taking away their Exclusive Economic Zone (EEZ) rights. Whilst the southern boundary of the South China Sea has never been defined, the Chinese maps claim rights over maritime territory that is south of Vietnam. This cannot be support either under international law, or historical records. That's not even within the South China Sea, in my humble opinion.

Finally, inasmuch as these three nations have never been historically allied with the United States, will not a push from China, no matter how gentle, polarise them ? We have enough regional tension in the area, thank you, without more conflict, thank you. We do not need to see the navies of three additional countries jockeying for position in the Spratley Islands, or at what must be the southernmost point in the South China Sea. Otherwise, country risk for all of them will increase. 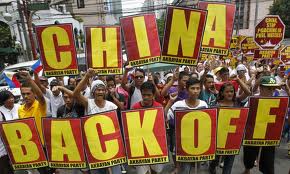