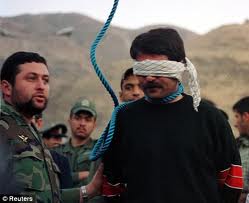 Yes, you read the headline correctly, that is trillions of Rials. Iran's Revolutionary Court has sentenced two embezzlers to death, and gave two others life sentences, in a case that appears to be the country's largest financial scandal to date. A total of thirty nine other defendants were also sentenced to prison terms of up to 25 years. Another report, unconfirmed, states that four were given the death penalty.

Reportedly, the defendants obtained forged Letters of Credit, which they used to get loans for the ostensible purpose of purchasing state-owned companies that were being privatised. The identities of the defendants are being withheld; Bank Melli, Iran's largest bank, is thought to be one of the banks defrauded.

The capital defendants were charged with "Corruption on Earth," a criminal charge that declares the individual is an enemy of God.  As soon as more details are disclosed, we shall publish the information.