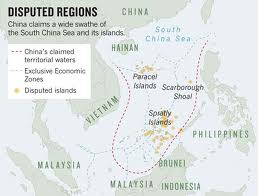 The Philippine Department of Foreign Affairs has filed a formal protest with China, over that country's establishment of an extensive prefectural-level municipality around Sansha City. The protest, which was lodged due to the fact that the Philippines considers it a fresh attempt to exercise control over the Spratley Islands, includes an area within the Philippines' Exclusive Economic Zone, which extends out 200 n.m.

The newly-established municipality contains over two hundred reefs, sandbars and islets, encroaches upon sovereign territory of a number of neighboring nations, including the Philippines and Vietnam. This new Chinese tactic is certain to become an aggravating factor in the ongoing South China Sea dispute.