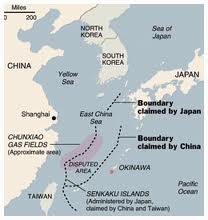 The East China Sea dispute is in the news again. Japan responded to China's provocative step of sending three patrol vessels into the waters surrounding the Japanese territories of the Senkaku Islands by recalling its ambassador to China for talks. This latest Chinese move, coming at the same time that China is seeking to assert sovereignty over the entire South China Sea, is disturbing.

If you paid attention in Asian history class, you know that Japan appears to have a valid claim. Originally named by British mariners the Pinnacle Islands, the Senkakus were ceded to Japan, together with all island dependencies of Taiwan (then Formosa), in the Treaty of Shimonoseki in 1895. It had been previously annexed by Japan. Occupied by the United States after the Second World War, the Senkaku Islands were returned to Japan in 1971. Only when surveys indicated that there were natural gas deposits did China claim the territories.

Many China watchers fear the East China Sea dispute has a greater chance of erupting into a major international incident than the situation in the South China Sea, with the attendant diplomatic and/or economic fallout. Any further incidents may result in an increase in Country Risk for Japan. Is this China's intention, to destabilise its neighbors, and annex these frontier territories ?