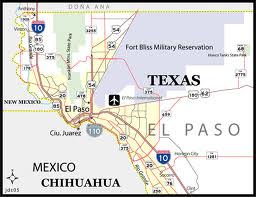 The weed of crime bears bitter fruit. Mexican newspapers on the frontier are reporting that Juarez police found the body of a 30-year old American female from El Paso, who had been convicted* of Bulk Cash smuggling, and later served time in a Federal prison in Arizona. She attempted to cross into Mexico in 2009, in a Ford Ranger, in which $268,000 in cash was secreted in the fuel tank, in 27 packages. CBP made the arrest and seizure. The vehicle had Mississippi license plates. She admitted that she was carrying out the operation for a boyfriend in the business.

Apparently she was to be paid $500 for a successful trip. Her sentence was 18 months. Her body was found in a septic tank, with evidence of blunt force trauma to the head. She had two children and was pregnant, according to Mexican media. American newspapers left out her personal story, as well as the gory details. Two days ago, her post-incarceration Supervised Release was terminated. She was probably already dead when that order came down.