VIKTOR BOUT SENT TO "GUANTANAMO NORTH" TO SERVE HIS SENTENCE 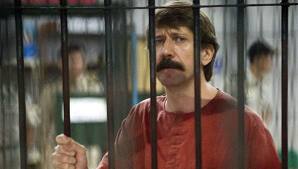 Convicted arms trafficker Viktor Bout, whose Bureau of Prisons designation to Colorado's 'Supermax" prison, which houses the worst inmates in the Federal prison system, was cancelled,  has been sent to the Communication Management Unit (CMU) at United States Prison Marion, which has been called Little Guantanamo by those who have been there, and is literally a prison within a prison.

CMUs, as they are referred to, are designed to minimise contact between a radical inmate and the outside world.  Since 9/11, some imprisoned radical islamists have sought to communicate with their associates, to continue their terrorist operations, and then there is the case involving the imprisoned plotters of the first World Trade Centre bombing, and their lawyer*, who was convicted of facilitating such communications. The CMU was apparently created to house convicted terrorists, like Al-Qaeda and Al-Shabaab, whose members have been placed there, but animal rights and environmental activists have also been designated there, much to the dismay of legal observers, who assert that such severe counter-terrorism measures should not be used against non-terrorists.

The conditions at a CMU are more restrictive than the BOPs Special Housing Units, or SHU, where I spent a couple of completely isolated weeks whilst I was in custody. At a CMU, inmate privileges  are severely circumscribed:

(1) One 15-minute outside telephone call per week, which must be in English, and is monitored and recorded. Calls to the inmate's attorney are not monitored.

(2) Four hours of visitation per month; contact visits are not permitted, the visit is through thick glass, using a telephone to communicate.

(3) The inmates have no contact with one another, and take all meals in their cell.

(4) There is no access to vocational training, nor is prison employment available.

In short, it is an extremely restrictive environment, designed to frankly eliminate any chance that a convicted terrorist can network with other inmates, or get a message to his organisation on the outside.

I understand the need to protect society from terrorists, but Viktor Bout, by any definition of the term, does not fit the mold of dangerous terrorist. Whilst his criminal conviction was for attempting to assist the FARC to perform a terrorist act, he himself is an arms dealer; You cannot label him a terrorist, and hide him away from the public, for purely political reasons.


Why such severe treatment for Bout ? I can only venture a guess, based upon conversations with those who have crossed paths with him in the past. Viktor Bout's assistance to the United States, over the course of several years, and in many different venues, is an aspect of his life that the United States Government would prefer remains hidden in the shadows, especially his former relationship with our secretive intelligence services.