TIJUANA CARTEL LEADER GETS 25 YEARS IN US COURT 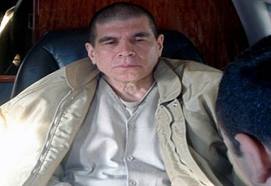 Benjamin Arellano-Felix, the former leader of the Tijuana Cartel, also known as the Arellano-Felix Cartel, was sentenced this week to serve 25 years in Federal Prison*. Arellano-Felix, who previously pled guilty to both RICO and Money laundering conspiracy charges, was also the subject of an Order of Criminal Forfeiture in the amount of $100m., which has apparently been reduced to a judgment.