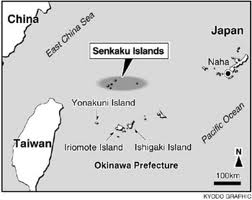 The attention that we having been giving to increased regional risk* in the South China Sea, between the Philippines, China and Vietnam, may now give way to increased tensions in the East China Sea, between Japan and China. The Governor of Tokyo has announced that its metropolitan government intends to purchase the Senkaku Islands** from a private Japanese owner, who is presently renting most of the island group to Japan; One other island appears to be solely in Japanese hands.

Sovereignty over this territory is disputed between Japan and China. Japan acquired the islands in 1895, after the Sino-Japanese War,  but in 1945 they came under US Government post-war administration of the Ryuku Islands. Senkaku was turned over to Japan in 1971, after the United States withdrew.

China claims that the Treaty of San Francisco, which ended the Second World War, and which ended Japanese claims to all territories save the Home Islands and minor dependencies,  extinguished Japan's rights to the Senkakus. Japan claims it exercised sovereignty over the islands before 1895, and that therefore they are exempt from the provisions of the treaty. 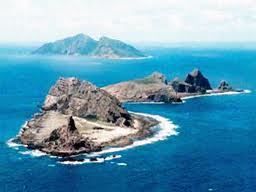 in 2010, a major diplomatic incident arose between the two countries when a Chinese fishing trawler was involved in a collision with a Japanese Coast Guard ship in the area of the islands. The Chinese crew was detained, and China lodged a protest over the incident. The captain and crew of the Chinese vessel were subsequently released without charges, but the incident damaged Sino-Japanese relations, and resulted in the termination, by China, of cultural exchanges.

Obviously, this news about Japan's intended purchase of the island group, which will obviously appear to China that Japan is looking to bolster its territorial claim, will spark a response. Whether diplomatic relations between the countries will suffer is not known, but looking at China's 2012 moves in the South China Sea, it is reasonable to expect that China will respond. Country risk observers please take note that Regional Risk may increase.