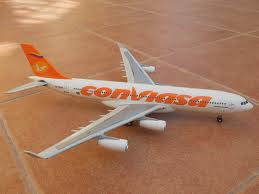 "The European Commission has adopted today the 19th update of the European list of air carriers which are for safety reasons subject to an operating ban or operating restrictions within the European Union. Conviasa, an air carrier certified in Venezuela, was added to the list due to safety concerns."

This action was based upon the Legal Notice filed by European Commission Mobility & Transport. The Air Ban List, which is a "List of Air Carriers of which all operations are subject to a ban within the EU," includes Conviasa.

The ban fails to specify exactly what operating conditions, ramp inspections, or other events caused this action, but the grounds may be much more disturbing than flight safety deficiencies.

Any one of these may have been the reason to ban Conviasa from EU airports:

(1) Seats on Conviasa's curious long-haul operation between Caracas, Damascus and Tehran, have a history of being inaccessible to civilian passengers. It has served as a conduit for Iranian nationals,  traveling for any number of reasons, including evasion of international sanctions, to gain access to the Western Hemisphere. Visas are freely available at the Venezuelan Embassy in Tehran for official travelers; I have seen a few of them on brand-new Iranian passports.

(2) Anti-Terrorism experts believe that agents of the Iran Revolutionary Guard Corps, especially the Quds Force, its international wing, have entered Venezuela in that manner. Remember also that there is a Hezbollah Venezuela, and this is probably the only direct, open access for members of specially designated global terrorist organisations to travel from the Middle East to Latin America. The arrest and detention, at the US-Mexican border, of non-Spanish speaking Middle Eastern nationals suspected of terrorist affiliations, carrying valid Venezuelan passports, validates this belief. Hamas, ETA, whomever the terrorist group du jour happens to be currently in favour with the Chavez regime.

(3) These wide-body A340 aircraft have been engaged in heavy cargo airlift of military materiel either way, eastbound or westbound. Most experts have heard rumours of missiles to Venezuela; small arms to Syria and Iran; what else has been shipped into Iran, evading the international sanctions ? These aircraft are exempt from normal customs procedures in Venezuela, so frankly, anything goes.

(4) Gold has been known to have been shipped in bulk to Iran; we can also assume that bulk cash, in the form of US Dollars, is also traveling from the Chavez regime to Iran. Remember, due to the sanctions, Iran is in dire need of "Greenbacks" to purchase goods and services in the global marketplace for cash. They are getting some of those needs met from Iraqi sources, but their international purchases from suppliers willing to do business surely do not involve credit.

(5) My best guess is that the EC does not want a nuclear accident at one of the EU airports, due to a mishap involving a Conviasa aircraft carrying Uranium to Iran, or even a nuclear device or component to Venezuela, whose leadership has longed to have the nuclear option. Is that really why Conviasa is now banned from EU airports ?

Should a Conviasa aircraft make a forced landing, or suffer an accident between Caracas and the Middle East, whether through equipment malfunction, or pilot error, we need to see what it is carrying on board, preferably with inspectors carrying radiation-measuring equipment, before its cargo is released. I wonder what will then happen to the Conviasa board of directors and the pilot in command.