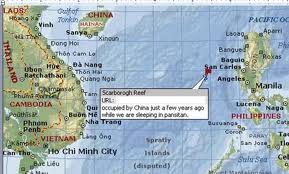 A territorial dispute between China and the Philippines resulted in an extended standoff this week between opposing naval vessels at Scarborough Shoal, a tiny island in the South China Sea. The Shoal, which is only 128 nm. from the Philippine island of Luzon, is 600 nm. east of China's Hainan island; it is within the Philippines' designated 200 nm. Exclusive Economic Zone, and within the Continental Shelf.

Chinese fishing vessels in the area were intercepted by a Philippine Navy cutter, which was in turn blocked by two Chinese maritime surveillance vessels. The claims of the Philippines to the territory have been disputed by China, which is now claiming sovereignty over the South China Sea, and all the islands contained within. This also includes both the Paracel Islands and the Spratley Islands. Chinese claims overlap those of several other countries in the region, and this has increased country risk since 2011.

The United States, which supports the right of free passage through this strategic waterway between Northeast Asia and the Middle East oil exporting countries, has sought to play a role in the territorial disputes between the Southeast Asia countries and China, much to China's obvious discomfort.