RUSSIA OBJECTS TO BOUT'S CONVICTION & SENTENCE, OFFERS TO REPATRIATE HIM TO SERVE HIS TIME THERE 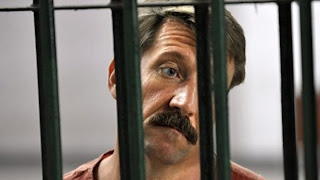 The Russian Justice Ministry, and the Foreign Minister personally, have weighed in on the 25-year sentence imposed this week in New York, upon convicted arms trafficker Viktor Bout, for attempting to sell missiles to the FARC, in an elaborate international sting operation conducted by American law enforcement. The case, from the Russian Government's perspective, has become one of the "top priorities in Russian-American relations," according to public statements made Justice Ministry spokesmen.

The Justice Ministry was extremely critical of what he regards as a purely political case, castigating the American criminal justice system, as well as American media. here are the statements:

"In spite of the unreliability of the evidence, the illegal character of his arrest involving the participation of US special service agents in Thailand and the subsequent extradition, American legal officials, having carried out a political order, ignored the arguments of lawyers and numerous appeals from all levels in defence of this Russian citizen."

"Long before the sentence was given to Bout, the authorities declared him the 'Merchant of Death' and almost an international terrorist, but this accusation was based exclusively on his imputed 'criminal intent.'"

"From there, an attempt was made to force him to admit his guilt by creating unbearable conditions for detention*, by both physical and psychological means. The absolutely unacceptable campaign by the American media was aimed at influencing the jury and the judicial process in the 'right direction.'"

Official statements made since the sentencing was announced indicate that Russia, possibly through the Foreign Minister when he meets with his American counterpart, Secretary Hillary Clinton, will ask that he be allowed to serve his sentence in a Russian prison. This procedure exists under the provisions of the European convention on the Transfer of Sentenced Prisoners, to which both the US and Russia are signatories. The question remains though, will the United States allow someone who has been found responsible for delivering the small arms that were used to fight to many of the developing world's conflicts, to be transferred elsewhere to serve his sentence in a country where he might be released for political reasons.