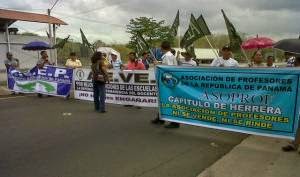 A senior Panamanian law enforcement source has indicated that the authorities are anticipating a full-scale riot in the streets of Panama City as early as Monday, and that they are taking preventive measures in advance. Here's why they feel that there is a good chance of a major civil disturbance next week:

(1)  José Domingo Arias, the candidate of President Martinelli's ruling party (CD), is expected to be declared the victor through election fraud, notwithstanding that he does not have a clear majority  among the candidates. The public reportedly does not want a repeat of the Martinelli administration, and they will express their displeasure in the streets, as they have many times in the past.

(2) Striking teachers blocked the Pan-American Highway, and their protests were met with force by local law enforcement. Rubber bullets, as well as live rounds were reported to have been fired. Many of the teachers are female, but that did not deter the use of force.

(3) Constriction workers are in the second week of a general strike, for higher wages, which has totally shut down the booming construction industry.

(4) Should Arias, and his vice presidential running mate, who is the president's wife, be elected, lawyers there fear a constitutional crisis, where an admittedly corrupt Supreme Court will be called upon to rule, and should they exempt Marta Linares from the law, there will be further protests and demonstrations.

The resulting chaos will interfere with the administration of justice during May, possibly denying litigants access to the court, during the last month before most members of the judiciary take their extended summer vacation June-September. It will also directly impact the financial sector, as downtown banks may be forced to close.