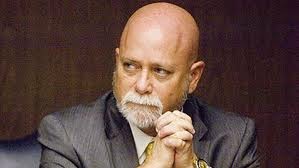 The third, and last, name partner in Rothstein Rosenfeldt Adler, the  Fort Lauderdale law firm that conducted a billion dollar Ponzi scheme, has been arrested, and charged with conspiracy*. Stuart Rosenfeldt is cooperating with the authorities, who have already scheduled a change of plea hearing for June 11th. A criminal Information initiated the case, which is a signal to the Court of the defendant's cooperation.

Attorney Rosenfeldt was involved in the firm's campaign finance fraud program, as the firm's check kiting bank fraud, and also in obtaining the assistance of Rothstein's local police officer associates, who made sure that a prostitute involved with Rosenfeldt was forced to leave town, when her boyfriend threatened to expose Rosenfeldt's vices, which constituted a civil rights violation.

An additional indicator of cooperation: the defendant has no restrictions on travel; he is not limited to the Southern District of Florida, and has, in fact travel plans out of the state. His counsel admitted that he has a substance abuse problem; this is usually disclosed early on, lest the Court remand him into custody, when drug tests come back positive. Being that the defendant is 59 years of age, he will now have the opportunity to clean up his life while serving his sentence, as the Federal Bureau of Prisons will surely place him in the appropriate program.

I am sure he wasn't alone among the partners at that firm, in engaging in high-risk activities. Mr. Rosenfeldt was paid $6m during the last full year that the Ponzi scheme operated, according to government sources. With his arrest, all the principal players in that law firm, both lawyers & non-lawyers, have been charged.