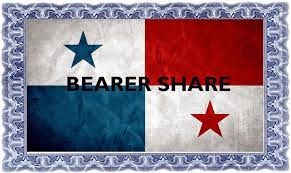 While we have discussed a number of cases, all occurring in the Republic of Panama, where expats become victims of bearer share fraud, we have not covered the actual tradecraft employed by the fraudsters. There are basically two varieties that I am familiar with:

(1) In the first method,  the seller of real estate, or his lawyer, advises the purchaser, usually a national from North America, or Europe, that he will rent out the condominium or home, that the victim just purchased, to produce an income stream for the client, and to do so, he needs possession of the bearer shares, of the corporation that is in title,  to demonstrate that he has the power to rent out the realty. After the client leaves Panama, the fraudster transfers title into an entity he owns or controls. When the victim next returns to Panama, he finds out that:

(a) He is no longer the owner; and
(b) The corrupt criminal justice system will not assist him, because the police and/or the prosecutor      have already been paid off by the fraudster to bury any complaint.
(c) If he wants to stay in his own property, he will have to pay rent to the fraudster.

(2) The second method involves outright forgery of stock certificates and other interests. In that case, any instruments given to the fraudster by the victim, form the basis of forged assignment of bearer shares, bills of sale, corporate resolution, and other closing documents. Again, any efforts by the victim to seek legal redress through the court system is frustrated by files intentionally lost at the police station and the prosecutor's office, bogus counter-charges filed by the fraudster's lawyers, and other intentionally dilatory tactics.

There are no statistics on how many expats have lost their real estate investments to these scammers, but it certainly numbers in the hundreds, if not more. Most victims, having experienced the dark side of Panamanian justice, do not engage in further investments, especially after their attorneys give them a quick tutorial on the corrupt civil court system, where cases can languish for a decade, unless corrupt Supreme Court of Justice judges are paid off.

One of  the most active fraudsters in the Republic of Panama, according to his victims, is Gary James Lundgren, whom we have covered here before, due to his curious partnership with Panama's President, Ricardo Martinelli, and his relationship as the "investment advisor" to David Eduardo Murcia Guzmán, the convicted Ponzi schemer. Mr. Lundgren has reportedly defrauded a large number of purchasers of the Bellagio Tower, by forging documents, and illegally taking title to the real estate investments of others. Now that his "godfather," President Martinelli, is about to leave office, you will see that a number of the pending lawsuits against Lundgren, by victims, will move forward. The role of his in-house attorney, Alcides Peña, in Lundgren's fraudulent activity, is being examined, as his widespread use of obviously forged documents, and documents that are inconsistent on their face, raises the issue of his culpability in these frauds.

The new president of Panama, who has vowed to attack corruption and white-collar crime, will hopefully see to it that bearer share fraud is vigorously prosecuted.