RUNNING FOR COVER, PANAMA'S CORRUPT PRESIDENT IS TRAVELING TO ISRAEL TO SEEK ASYLUM 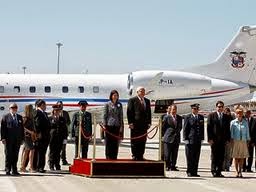 His pleas for asylum having fallen upon deaf ears in Portugal & Spain, President Ricardo Martinelli is, according to reliable Panamanian sources, en route to Israel, where he hopes he can be granted some form of asylum or citizenship. He is desperately seeking to avoid that Italian indictment for corruption, and the prison term that comes with it.

He is reportedly claiming that a Lebanese organized crime group, headquartered in Latin America, is looking to do him harm, and he believes that Israel will take the threat seriously. There are rumors that Martinelli actually cheated a senior leader in that group out of an expensive condominium in Panama City, and that is the reason that he has been targeted, but he is alleging that a terrorist group wants to kill him. Whether Israel buys into it, I cannot say, but I would prefer that justice be served. Otherwise other Latin American leaders will be encouraged to lie, cheat and steal from their own people, and believe that they can get away with it.
Posted by Kenneth Rijock at Monday, May 26, 2014