The Grand Chamber of the European Court of Human Rights has entered a judgment of ninety million Euros, against the Government of Turkey, for damages suffered by Greek Cypriots during the 1974 Turkish invasion of Cyprus, and the subsequent occupation of the northern portion of the island, which has never been accepted by the international community.

Whether the announcement of this judgment throws cold water on the recent joint Greco-Turkish talks  at unification, and thereby, on Country Risk for Cyprus, is too early to call, but the ECHR case could sour the improvement of relations. 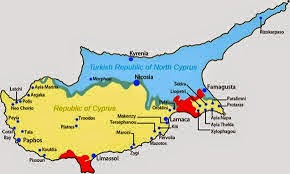