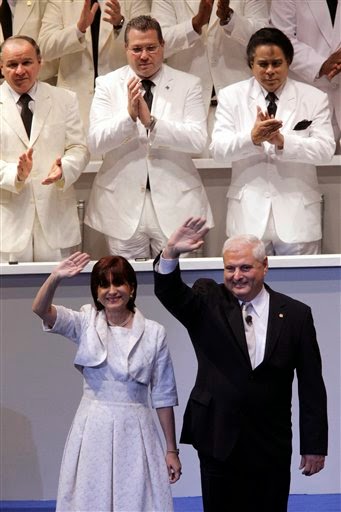 With Panama's presidential election only a couple of days away, Panama watchers are concerned that the front-runner, Arias, will precipitate a constitutional crisis with his victory, due to his choice of running mate. According to the Panamanian Constitution, a close relative of a sitting president cannot either succeed him, or serve as vice president, yet President Martinelli's wife , Marta linares is on the ticket as VP.

It is believed that Martinelli has a majority of the judges on the Supreme Court of Panama in his pocket,  and who will dismiss any constitutional challenges to her taking office, but a political crisis is the last thing that Panama needs right now. Civil unrest, including violent demonstrations, has appeared whenever the population is angered, due to any perceived injustice, especially when they feel powerless, in the face of presidential power. It could get ugly in Panama City next week.
Posted by Kenneth Rijock at Wednesday, April 30, 2014