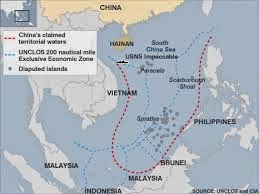 China has again caused regional tensions to increase in the countries that border the South China Sea, and Country Risk may be affected, should incidents blossom into military confrontation. Here are the two new problems:

(1) The Philippines has advised that China is building an airfield on disputed territory in the South China Sea. The location, which was once the scene of a bloody battle between Chinese forces, and Vietnam, is contested, and this new action will only further alienate China's neighbors.

(2) The placement of a Chinese oil drilling platform in disputed territory, which is totally within Vietnam's Exclusive Economic Zone (EEZ), and in area where Chinese military defeated the former
Republic of Vietnam in 1974, has resulted in widespread anti-Chinese riots in Vietnam.Chinese-owned
businesses were destroyed, and Chinese nationals assaulted. A large number of Chinese are now leaving Vietnam.

Readers who are charged with the assessment of Country Risk should remember their history. Vietnam, which fought a brief, inconclusive frontier war with China in 1979, has a long history of opposing external forces, and nationalist sentiment there has increased of late, due to what is regarded as Chinese meddling in Vietnamese territory. The Philippines is still smarting over Chinese actions, uncomfortably near its shoes, and wholly within its EEZ.

The Chinese economy, which is already having minor problems, could nose-dive if China actually gets into a shooting war, and some countries ban Chinese-made goods; Watch this region closely.
Posted by Kenneth Rijock at Monday, May 19, 2014