IS SOCOM VENTURING INTO THE CROWDED FIELD OF MONEY LAUNDERING INVESTIGATIONS ? 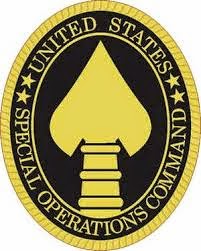 The United States Special Operations Command (SOCOM), whose headquarters is at McDill AFB, Florida, has been seeking Congressional approval for an additional $10m in its budget, for a permanent facility, to house a National Capital Region (NCR) office, in Washington. What SOCOM operations it intends to conduct there have not been publicly released, but if they are anything like plans discussed in the exercise it conducted, in the DC area, and named Quantum Leap, it looks like a pure intelligence operation, and there may be concerns, not just regarding costly duplication of effort with other US Government agencies, but issues of military involvement in domestic law enforcement, with a lack of oversight.

Quantum Leap, which was an experiment in the use of open-source social media information, in the field of counter-threat finance, admittedly, in the unclassified draft report now in the public domain, contemplated a number of future topics, including the investigation of legal money movement, and illicit drug money laundering. The project's stated goal was to embed SOCOM deeply into the domestic law enforcement and intelligence agencies, for the purpose of extracting useful intelligence regarding what are characterized as the achievement of national security objectives, primarily along indirect lines of operation. This amounts to counter-narcotics, and money laundering, investigations, and it would, in my estimate, take years to ramp up an effective, experienced, and capable operation; existing agencies already possess those qualities.

While I have the utmost admiration for the achievements of the special operations units, from the four uniformed services that make up SOCOM, and am aware that they have special needs, when it comes to actionable intelligence, to complete their missions, building, from scratch, a massive intelligence collection facility, seems to be an expensive duplication of the good work done by the Drug Enforcement Administration, the FBI, the Department of Homeland Security, in the law enforcement sector, and the Defense Intelligence Agency, US Army Intelligence, and several other existing agencies, each with decades of experience in their respective fields, in the military intelligence community. Counter-threat finance is not the primary mission of military; we have an alphabet soup of Federal agencies charged with that responsibility.

The stated SOCOM-NCR tasks appear to be straying over the responsibility for national security, into the conduct of what amount to domestic law enforcement investigations. Given the history, for valid reasons, of non-transparency, regarding special operations, the full extent of such investigations will most likely be classified, meaning that they are off limits to any civilian scrutiny. Whether there will be violations of the Constitutional rights of US citizens, I cannot say, but it is troubling to think that a branch of the US military desires to conduct major intelligence collection activities inside CONUS, without oversight. Money laundering investigations, in the US, are the exclusive province of our law enforcement agencies, both Federal and state.

On a fiscally responsible level, surely there are sufficient, existing resources available, that SOCOM can obtain unfettered access to, which will meet its needs for intelligence on potential national security targets. Do we really need one more government agency investigating drug money laundering in this country ? That money would be better invested, in my humble opinion, in the DEA budget.