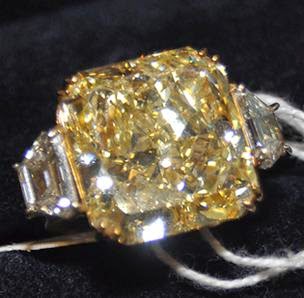 The trophy wife of attorney Scott Rothstein, whose sale of "investments " in ficticious out-of-court settlements was merely a billion-dollar Ponzi scheme, had a two million dollar judgment entered against her this week, in favor of Michael Goldberg, the Liquidating Trustee assembling assets to pay her husband's victims. Kim Rothstein, who is presently a guest of the Federal Bureau of Prisons at FCI Coleman, withheld jewelry and gold from the trustee, and attempted to sell them covertly, after her husband was imprisoned.

The Bankruptcy Judge in the Rothstein law firm case*, Raymond Ray, did cut her a break; the judgment states:

"In the event that the Liquidating Trustee recovers and liquidates any of the jewelry, the amount of the judgment shall be reduced by the net proceeds of any such recovery."