PANAMA'S PRESIDENT, CONCERNED ABOUT BEING INDICTED, SEARCHES FOR ASYLUM 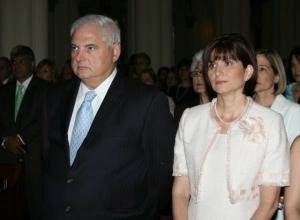 Panama's President Ricardo Martinelli, away on his 89th overseas trip, purportedly to watch a football game in Lisbon, is in reality searching desperately for a country that will take him in, and shield him from the major corruption charges waiting for him in Italy. His term as president expires in a little over a month. Sources in Panama indicate that he is going to ask for political asylum in Portugal, Spain, and possibly Israel, for himself, and his family, including his grown sons, who are also alleged to have profited handsomely from their father's official position.

It is difficult to imagine that any EU government would accept him, under any conditions of asylum that would prohibit his extradition to Italy. He has made much of the "death threats" against him, attributed the a number of female political figures, but these unverified claims hardly raise to the level where he could claim political asylum, and he does have dual Italian citizenship.

He may have to face Italian justice, after all, for accepting millions of dollars in bribes and kickbacks, for giving large contracts to a government-owned Italian company.