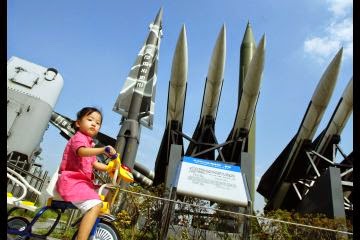 The United States is said to be considering the deployment of a missile-defense system in the Republic of Korea, to protect its ally against North Korean weaponry. As expected, China has vehemently objected to this proposed plan, bluntly warning that it would upset the balance of power in Northeast Asia.

Remember how the Russian Government reacted to the American plan to post missiles, and radars, in Eastern Europe, to protect NATO from Iranian missiles ? If the US goes forward with its plan, expect to hear even more complaints from the Chinese, as well as North Korea. While sending the missiles to South Korea is prudent, it will probably raise Country Risk for both Koreas, and possibly China, if it responds by moving military assets into its territory adjacent to the Korean Peninsula.
Posted by Kenneth Rijock at Thursday, May 29, 2014