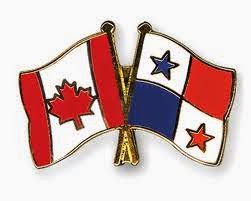 It is an open secret in Panama that most of the sitting ministers from the outgoing Martinelli government have had their visas to enter the United States revoked. Some have been engaged in money laundering, some in narcotics trafficking, but most have lost the privilege of visiting the US due to well-documented cases of corruption, namely, that they have accepted bribes and kickbacks. US law enforcement agencies have been investigating these corrupt officials for years, and they have a boatload of proof.

While the United States does not publicly confirm that a specific individual has lost his or her US visa, reliable sources in Panama state that no less than eleven ministers have been so sanctioned. Unfortunately, this is not the case in Canada, where all those government ministers with revoked US visas are allowed free entry. They are known to be conducting their affairs with financial institutions located in Canada, notwithstanding the PEP status, and their well known allegations of criminal conduct. I have previously* warned readers of this blog about the strong possibility that corrupt outgoing Panamanian officials may be hurriedly visiting their bank to draw out illicit wealth.